A Picture Speaks a Thousand Protesters

In a series of rolling actions by A30 Anti-War protestors, all branches of the ANZ Bank in the Sydney CBD have been forced to close...

Indymedia readers are beside themselves:

Fantastic action guys. clear message, effective and great organisation. you should be pround of yourselves.

Huge turnout, there. Huge. That's about a fifth of the size of my 19th birthday party.

Tim Blair even has a picture: 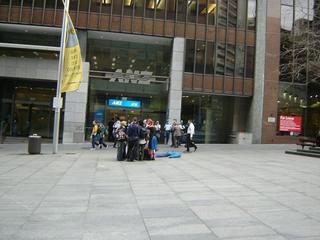