My Entry in the Iranian Holocaust Cartoon Contest

The jailing of David irving reveals the fragility of the Holocaust story. If history is fact, backed up with fact, then do you really jail someone who has a different opinion just to shut him up?

One has to question the story when they are behaving so damned ridiculous. Who are the nazis?

No-one has been killed as a result of David Irving's free speech, the same cannot be said for the free-speech of European editors who besmirched Islam. Dozen's (sic) have died in clashes fomented by their racist cartoons. 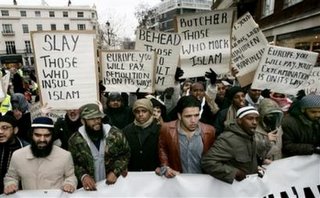 Picture David Irving walking into the prison shower block on his first night in jail... If you thought the Jews were worried going into the showers...

Thank you! Now all I need is someone to draw it...

Update 2: Link now fixed (it was only internal - regular readers missed nothing). This is the second time this has happened this week, and I could swear it wasn't me - I'm pretty good at checking before publishing. Is anyone else having such issues with Blogger? Maybe it was the Jews...

Comments:
Whats the soap made out of?

The link in your article doesn't work.

Faruque has published his telephone number and address:

He also seems to be in some kind of legal trouble over an unpaid fine.

He is a weird man.